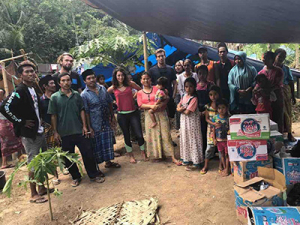 On August 5th, 2018 Lombok, the neighboring province to the east of Bali, Indonesia experience a 6.9 magnitude earthquake 31km deep. Since then, 31 ea ...Read more

On August 5th, 2018 Lombok, the neighboring province to the east of Bali, Indonesia experience a 6.9 magnitude earthquake 31km deep. Since then, 31 earthquakes have been reported ranging in magnitude of 1 - 5.9. The critical areas affected are the islands of Gili Trawangan, Gili Air and Gili Meno. In addition, the shorelines of North Lombok. The Gili islands have suffered million of dollars in damage due to the earthquake. Despite these concerning reports, most properties on the islands have western ownerships with insurance coverages. The purpose of this fund is to fundraise for individuals of Northern Lombok who have suffered equivalent economic damages as the Gili Island but received no governmental help. Locals working on the Gili Islands were evacuated back to Lombok where they found their villages and homes destroyed. 347 people have been reported dead since the August 5th earthquake.

Nur Azlina
lina@rimici.com
View details
No donations received
Be the first to donate
No reports posted yet!