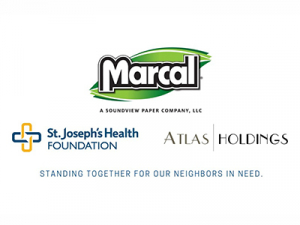 In coordination with Marcal Paper and its owner, Atlas Holdings, St. Joseph’s Health has created this page to help Marcal team members whose jobs we ...Read more

In coordination with Marcal Paper and its owner, Atlas Holdings, St. Joseph’s Health has created this page to help Marcal team members whose jobs were lost due to the devastating fire at its Elmwood Park, New Jersey mill on January 30, 2019. All funds raised will be collected by the St. Joseph’s Health Foundation and then distributed by Marcal to impacted employees. St. Joseph’s Health has long been a community partner of Marcal Paper; the Marcalus family – Marcal’s Founders, are longtime supporters of the health system. As such, they are the ideal partner to collect donations; all support received will be fully tax deductible. Founded in 1932, Marcal Paper quickly became one of the leading producers of recycled products. In the decades to follow, the company battled through several challenging periods before beginning a new chapter in 2012 under the ownership of Atlas Holdings. At that time, Atlas committed to honor the company’s past – and invest the dollars necessary to build an even brighter future. Hundreds of good-paying jobs right here in New Jersey were subsequently saved, and the iconic Marcal sign – a symbol not only of a great business but of the power of manufacturing to drive our economy – was restored to the roof of our mill in Elmwood Park.

Nur Azlina
lina@rimici.com
View details
No donations received
Be the first to donate
No reports posted yet!